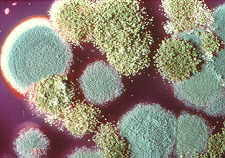 (The yellowish colonies are of Aspergillus flavus, a producer of aflatoxin. The green colonies are of Penicillium, another mycotoxin-producing genus (ochratoxin, patulin, penitrem, PR toxin).


During the digestion of substrates, fungi secrete enzymes into nutrients in order to break down complex compounds into simpler compounds that can be taken up by the fungi and used as nutrition. These digested nutrients produce secondary metabolic byproducts called mycotoxins that are released to give the fungi a competitive edge over other microorganisms and fungi. Unfortunately, mycotoxins can also be incredibly toxic to humans causing a variety of responses including cold/flu-like symptoms, sore throats, headaches, nose bleeds, fatigue, diarrhea, dermatitis, and immune suppression. Some mycotoxins may also be carcinogenic and teratogenic.

Molds that have been known to potentially produce these toxins are:
Even though these molds may potentially produce mycotoxins, they will not do so unless specific environmental conditions exist. Currently, it is unknown exactly what conditions promote the growth of mycotoxin production and more scientific research needs to be conducted on this topic for it to be fully understood. However, Since I was stuck in a building that was oozing with Mycotoxins, watching them drip from walls...I know that it certainly takes lack of fresh air, high amounts of humidity, and a lot of paper, drywall, water and other building materials to feed them. It begins as well if there are other competing molds in the same area. 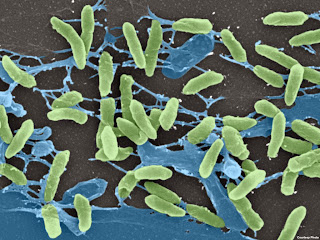 Mycotoxins are the mold's venom so to speak - It's defense mechanism. In living mold that is threatened, it will produce more. So if someone cleans away mold with bleach, the mold's root system will reproduce stronger and therefore produce a much higher count of mycotoxins as a result of it being attacked. Mold does have a basic form of intelligence. It recognizes when something is trying to kill it.


“Myco” means fungus, so think of mycotoxins as “fungi toxins”. They are designed for chemical warfare against other organisms, even against other types of molds.

Here are those more commonly known Mycotoxins
and what kind of Mold produces them.
Sometimes knowing what is effecting you,
Helps dramatically in removing them from your body as well. 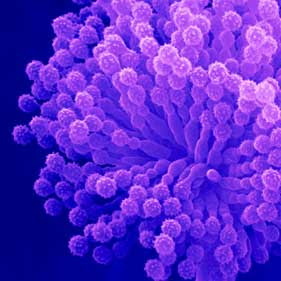 Aflatoxin: This mycotoxin is primarily produced by Aspergillus species. It is one of the most potent carcinogens known to man and has been linked to a wide array of human health problems. The FDA has established a maximum allowable level of total aflatoxin in food commodities of 20 parts per billion (ppb) and the maximum level for aflatoxin in milk products is 0.5 ppb. Aflatoxin is a potent human carcinogen. It is a naturally occurring toxic metabolite produced by certain fungi (Aspergillus flavis), a mold found on food products such as corn and peanuts, peanut butter. It acts as a potent liver carcinogen in rodents (and, presumably, humans).


They are probably the best known and most intensively researched mycotoxins in the world. Aflatoxins have been associated with various diseases , such as aflatoxicosis , in livestock , domestic animals and humans throughout the world. The occurrence of aflatoxins is influenced by the weather, (temperature, and humidity - warm & wet is worst!); so the extent of contamination will vary with geographic location , agricultural and agronomic practices, and the susceptibility of the peanuts to fungus before they are harvested, and during storage, and/or processing periods . Aflatoxins have received greater attention than any other mycotoxins because they clearly have a potent carcinogenic effect in laboratory rats and their acute poisonous effects in humans . In the 1960 more than 100,000 young turkeys on poultry farms in England died in the course of a few months from an apparently new disease that was termed "Turkey X disease" . It was soon found that the difficulty was not limited to turkeys . Ducklings and young pheasants were also affected and heavy mortality was experienced.
______________________________________________________________

Ochratoxin: This mycotoxin is primarily produced by species of Penicillium and Aspergillus. Ochratoxin is primarily a kidney toxin but if the concentration is sufficiently high there can be damage to the liver as well. Ochratoxin is a carcinogen in rats and mice and is suspect as the causative agent of a human disease, Balkan Endemic Nephropathy, that affects the kidneys and often tumors are associated with the disease. The toxin may be still present in products made from grain and the human population is exposed in this manner.

A significant impact of ochratoxin is that it occurs in such a wide variety of commodities such as raisins, barley, soy products and coffee in amounts that may be relatively low. However, the levels may accumulate in the body of either humans or animals consuming contaminated food because ochratoxin is often not rapidly removed from the body and significant amounts may accumulate in the blood and other selected tissues. The awareness of the occurrence of ochratoxin in this wide variety of commodities has been possible through increased sensitivity of the methods for the analysis of ochratoxin. Of significance is our recent finding of high levels of ochratoxin in house dust. 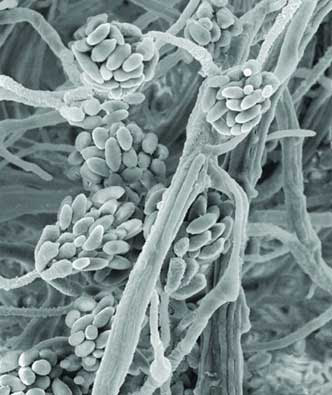 Tricothecene: The toxin is produced by Stachybotrys spp., Fusarium spp and has even been indicated as a potential agent for use as a biological weapon. One of the more deadly mycotoxins, if it is ingested in large amounts it can severely damage the entire digestive tract and cause rapid death due to internal hemorrhaging. It has also been implicated in human disease such as infant pulmonary hemosiderosis.  Mycotoxins act by inhibition of protein synthesis. Symptoms start within minutes to hours after exposure, and involve eyes, skin, respiratory and gastrointestinal tracts. 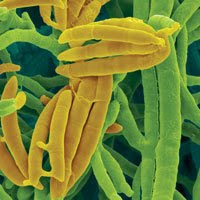 Zearalenone:  A resorcylic acid lactone, is a nonsteroidal estrogenic mycotoxin produced by numerous species of Fusarium. As a result zearalenone is found in a number of cereal crops and their derived food products. A closely related substance "zeranol" (zearalanol) is at present being used in the United States and Canada as an anabolic agent in beef cattle. Zearalenone has been implicated in numerous incidences of mycotoxicosis in farm animals, especially pigs. In this report the health risks to Canadians due to the presence of zearalenone in food products have been evaluated. The first part of the report deals with the physicochemical aspects, mycology, laboratory production, and natural occurrence in plant products and animal products of zearalenone. The stability of zearalenone in foods and feeds, the effects of food processing, and the removal from foods and feeds by physicochemical means are also discussed.

From this data, the daily exposure of Canadians to zearalenone from food consumption has been estimated to be in the range of 0.05-0.10 microgram/kg b.w./day (mean and 90th percentile of eaters, respectfully) for young children, the highest consumption group on a body weight basis. The second part of the report deals with the metabolic disposition of zearalenone as well as the available toxicity data base of zearalenone in laboratory animals, farm animals, and humans. Studies in various species (rodents, rabbits, pigs, monkeys) including man have shown that zearalenone has estrogenic and anabolic activity. Its major effects are on reproduction, including reproductive organs and their function, leading to hyperestrogenism. Zearalenone has been implicated in numerous incidences of hyperestrogenism in farm animals, especially pigs. Important differences in the biotransformation of zearalenone were noted, with greater amounts of alpha-zearalenol, the more estrogenic metabolite, formed in man and the pig compared to rodents. In addition, the biological half-life of these substances was longer in man than in other species tested. 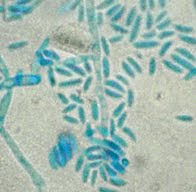 Fumonisins: are a group of recently characterised mycotoxins produced by F. moniliforme, a mould which occurs worldwide and is frequently found in maize. Fumonisin B1 has been reported in maize (and maize products) from a variety of agroclimatic regions including the USA, Canada, Uruguay, Brazil, South Africa, Austria, Italy and France. The toxins especially occur when maize is grown under warm, dry conditions. Exposure to fumonisin B1 in maize causes leukoencephalomalacia (LEM) in horses and pulmonary oedema in pigs. LEM has been reported in many countries including the USA, Argentina, Brazil, Egypt, South Africa and China. FB1 is also toxic to the central nervous system, liver, pancreas, kidney and lung in a number of animal species.

The presence of the fumonisins in maize has been linked with the occurrence of human oesophageal cancer in the Transkei, southern Africa and China. The relationship between exposure to F. moniliforme, in home-grown maize, and the incidence of oesophageal cancer has been studied in the Transkei during the ten-year period 1976-86. The percentage of kernels infected by F. moniliforme was significantly higher in the high-risk cancer area during the entire period; and FB1 and FB2 occurred at significantly higher levels in mouldy maize obtained from high-risk areas in 1986.

There are doctors in our country that can help you. There are also wonderful groups online as well on Facebook that have people all over the country and world who are suffering just like you and maybe your family.  Just log on and type in "Toxic Mold" or "Mold" in the top search box and there you find links to join.  It's possible that you might even know some of these people.  My personal Group is called "Divinely Toxic - Mycotoxins, Mold and You" Just click the link above and you can request to join. Over 1800 members presently and constantly growing.


There are also many wonderful sites listed on this page that have information to help you in your fight against this terrible illness. Also there are trusted Mold Specialist that can accurately and honestly diagnose your home or office to ensure you get the best treatment in court. It plagues and kills over 500,000 people every year. Sadly these people have a diagnosis rate of 10% out of this number and the very few who even win cases; 2%; the lowest percentile. (click link next to type with the "F" and you'll be directed to Facebook.)

On this site I will provide you with links to great websites, and doctors who can help you. It is being worked out whether or not Anti-fungal drugs like Diflucan (fluzonazole), are proper treatments for Moldies due to our low immune, endocrine and detoxification systems. They might be too strong for some of us, and can even create a resistance to the drug if used in improper doses for the individual.  My page listing back at the top (Or Scroll Menu) will show you a natural ways of curing yourself and your environment of this illness.

Email ThisBlogThis!Share to TwitterShare to FacebookShare to Pinterest
Home
Subscribe to: Posts (Atom)
Learn what kind of mold you have, how to clean it naturally, what doctors can help you, diet and remedies to rid body of candida and toxins. Be open and we will try to help you in your fight. Please leave a comment on anything you wish to see here, I will happily add it after review. Be well, stick to your diet, and come back for any questions you might have. I will answer them as soon as I can.

I have personally screened items off of Amazon, that are the very items you will need in your fight against mold poisoning, candida infections, weaning and detox foods that are no sugar and no carbs. Also Neem Seed Oil, Coconut Flour, Ammonia, and uses for Vinegar and Baking soda you might have never thought of. It's not that hard to start fighting the toxins, its hard to change your eating habits as well as your daily rituals that include toxins. Be strong and be willing to change for your health. Feel free to check out on the Home Page and "Our Health Store" link - There are wonderful items for you on there, and Any purchase will help me along in the good fight as well.